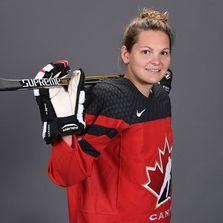 Jennifer Wakefield is a professional ice hockey player that plays for the Canadian National Women’s Ice Hockey Team. Her story about how she got involved in hockey is quite unique.

Her parents first put her and her sisters into a learn-to-skate program but all with figure skates.

Jennifer lasted about 3 minutes in figure skates, and then went to the bench and told her parents that she didn’t want to wear white skates and that they hurt her feet. The next skate, her parents put her into hockey skates while her sisters stayed in figure skates. Jennifer wasn’t sold on skating and her family also spent alot of time up North skiing. She was alot more comfortable on skis than skates, and loved to watch her sister competitively ski. It wasn’t until one day after a learn-to-skate session that Jennifer started watching girls on the ice play ringette. She didn’t know what the sport was called at the time, so she asked her dad what these girls were playing. Her dad told her a small lie, and said they were playing “hockey”. He told Jennifer that she would have to skate for a whole year, and then he would sign her up for hockey the following year. And now, the rest is history as Jennifer Wakefield has been playing hockey her whole life.

Jennifer Wakefield was born in Scarborough, ON but has lived her whole life in Pickering. She was in the French Immersion program at Frenchman’s Bay Elementary School and later attended Dunbarton High School. Jennifer was named Female Athlete of the Year at her Elementary School, and every year at her high school. She played all her hockey with Durham West Girls’ Hockey Association, except when she played boys hockey with the Scarborough Stallions in grades 7 and 8. Jennifer Wakefield was the first exception at Durham West when she was allowed to jump age groups and play with older players.
At age 15, Jennifer Wakefield played on her first of three Team Ontario teams. She won two national championships, and her last year she was an Assistant Captain and led all scoring in the Canada Winter Games where Team Ontario captured gold.

Jennifer Wakefield played four years on the Canadian National Under-22 team, and she served as team captain her final year when the Canadians swept the three game series against the United States.

At 18, Jennifer played in her first tournament with the Sr. National Womens’ Hockey Team. She was selected at age 20, to be a part of the 2009 centralization roster to try out for the Vancouver Olympic Games. Unfortunately, 2009 was filled with many injuries for Jennifer. She missed the 2009 World Championships with a 3rd degree high ankle sprain and missed 3 months with a grade 3 shoulder separation when she got hit from behind. After returning from her shoulder injury, she blocked a shot and broke and dislocated her hand which required surgery in late December. She was named as an alternate to the 2010 Olympic Games, but did not participate.

After high school, Jennifer Wakefield decided to take her talents south of the border to play NCAA hockey. Jennifer spent her first two years at the University of New Hampshire, took a year off to train for the Vancouver Olympics, and then decided to go to Boston University for the remaining two years of her college career. Her last year at Boston University, she served as captain, selected as Boston University Female Athlete of the Year, named to the All-Decade Hockey East All-Star Team, and Team MVP.

After Jennifer’s final year of college, there was a gap year between her college career and hopefully being centralized for the 2014 Sochi Olympics Games. She decided to return home to Pickering and play for the Toronto Furies in the Canadian Womens Hockey League. She was happy to play a season close to home while preparing to make a push to crack the Olympic team. During her season with the Toronto Furies, she had her break out season with the Canadian National Team at the 2013 World Championships. She tallied a career high in points, leading face-off percentage of the tournament, and second leading scorer of the tournament.

During the 2013-2014 season, Jennifer Wakefield was selected to the 26 player roster to tryout for the Sochi Olympic Team. It was a gruelling year that kicked off with a month long boot camp in Penticton, BC and then moving out to Calgary, AB for the year. The days were long, physically and mentally draining but there was nowhere else she would rather be. Jennifer had a different fate this centralization as she was named to the 2014 Olympic Team! Her childhood dream of representing her country came true. In February 2014, Team Canada captured the attention of the country by winning the Olympic Gold.

After the Olympics, some players returned to play for their previous team or to take a break from hockey. Jennifer decided to take her hockey career to Europe. She initially thought it would be a great opportunity to travel and snowboard a ton but it turned into something much more. She played the playoffs with MSSK (A hockey club in Northern Sweden that competed in the top division) that lasted a month. Unfortunately, they were eliminated by the eventual winner of the Swedish Championships, but Jennifer had discovered a new love of playing overseas.

The following year, Jennifer signed on to do something out of the ordinary. She decided to move to the south of Sweden to play with Linkoping Hockey Club that played in Rikserrien (top swedish league for women). She also decided to play on a transfer card with a Men’s Division 3 team in Norrkoping called IK Guts. This would only be her third year ever playing boys hockey. She had previously played in the Greater Toronto Hockey League (GTHL) for two seasons. Jennifer believed it would be the best of both worlds playing both mens and womens hockey. Jennifer had a successful season with both clubs. Linkoping HC won the Swedish Hockey League in the best of three series against AIK where she was the leading scorer in the playoffs. Jennifer also did well adapting to the boys play with IK Guts where she averaged just under a point per game (15g,13pts).

This season Jennifer found herself in an unfamiliar situation. Jennifer signed with Boras Hockey, jumping up to play Men’s Division 2 in the South of Sweden. She enjoyed playing in the first six games of the season, but unfortunately due to visa circumstances, it was no longer a possibility for Jennifer to remain with the organization. Jennifer decided to return to her previous womens’ team, Linkoping Hockey Club, for the remainder of the season to continue to push towards her dream of competing for Canada at the 2018 Olympic Winter Games. 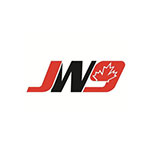